Queer Issue: Moving and Moving On

For the record, the next couple of weeks may see a slight decrease in the number of posts here. I'll give you all a hint: 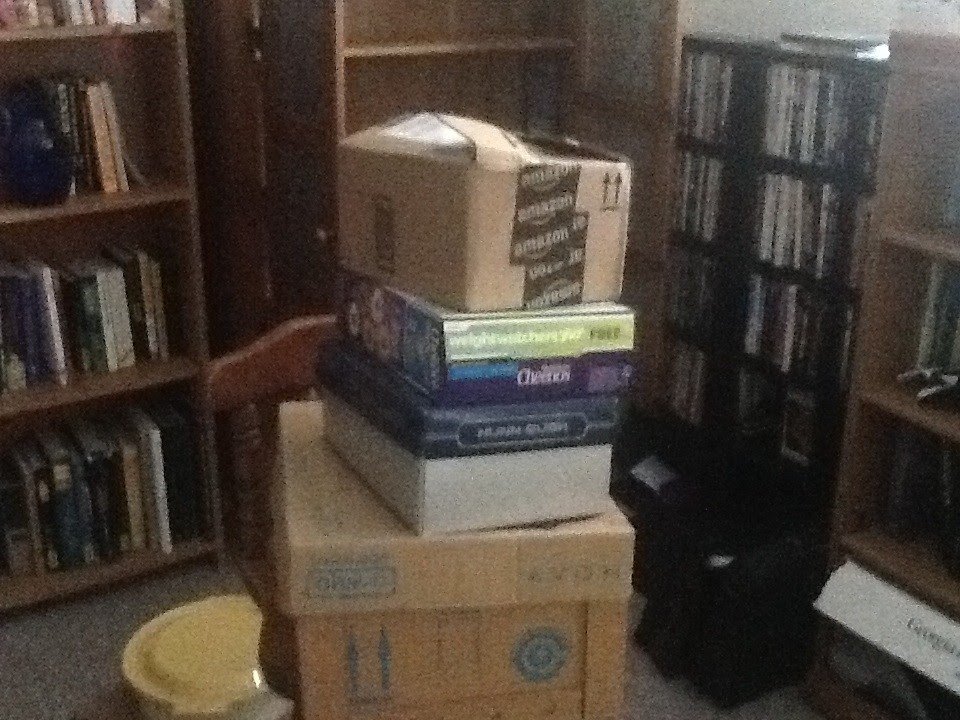 That's right, I'm going to be moving. I'm going back to school to major in Criminology at Wilkes University where my current partner is currently teaching.

Of course this means that I'm now getting out all the stuff shoved away in closets, sorting it out and packing it in the boxes for the move.

This also includes all of my memorabilia from when I was a member of the Boy Scouts of America. Thanks to the Boy Scout's "Don't Ask, Don't Tell" policy, the end of my tenure with the BSA was not a happy one. To put it bluntly, it was a long misery infused descent into hell.

It's a difficult thing to put the situation I now face into words. The list of items that I accumulated over my 13 year involvement with the scouting movement is quite extensive.

There are the merit badges, various memorabilia from the National Jamboree I went to in 1997, my uniform, neckerchiefs, patches, and so on. Each one comes infused with memories, such as the neckerchief slide an adult leader carved for me when I went an entire week of scout camp undefeated at checkers.

However because of how things ended with the Boy Scouts, I've been tempted to just burn all of it.

I first started with the BSA when I was in 1st grade as a Cub Scout.
I can recall a baking contest, where my dad and I made a cake, constructed it into the shape of a truck, which won best in show. And by in the shape of a truck, I don't mean we baked a sheet cake and cut out a truck shape from that. That would have been too straightforward. I mean we actually used pieces of cake to sculpt a 3 dimensional a cake truck.

I have other memories of Cub Scouts of course. Of Pine-Wood Derbies, earning belt-loops, bug juice, and making arts and crafts at scout camp. I think my mom still has the ceramic pot holder I made one year.

A pine-wood derby is a competition where you race wooden cars on downward tracks. One way to make your car faster was by drilling a hole in the car and filling it with some kind of metal. This was legal as I recall as there was a total weight you couldn't go over. In any case, I definitely recall my mom not being too pleased when in a bout of enthusiasm while working on my Pine-Wood derby car, I managed to use an old-fashioned hand powered drill to put a hole an inch deep into the floor I was working in.

I can recall my first "real" camping trip as a Boy Scout, when true to the rules of the universe, it rained and rained heavily. As the night progressed, water crept gradually into the tent. Eventually, to stay warm, the three of us that were in the tent all ended up in the same sleeping bag. When we went to tear down the tent, I could push on the corner of one sleeping bag and watch the water ripples spread out across all three. I think in all my years with the BSA, there was only one or two camp outs that was not accompanied with copious amounts of H2O falling from the sky.

As a Boy Scout I was inducted into the Order of the Arrow (Boy Scouts Honor Society), went to the National Jamboree, served as Troop Scribe, Assistant Senior Patrol Leader, and eventually Senior Patrol Leader. I managed to earn the rank of Life Scout, the rank just below that of Eagle. Scoutings highest rank eluded me by only a handful of merit badges that I failed to earn, thanks in part to the mental decline I experienced before turning 18.

However, as time advanced and I started to struggle with my sexuality, I also started to hear more and more about the BSA's "Don't Ask, Don't Tell" policy. But much like the frog in a pot of water that was slowly heating up, I was in too deep and too ingrained to simply want out.

Of course, as I advanced from Weblo's to Boy Scouts this meant I had to keep my budding sexual orientation a secret. It was tempting to bail, and part of me wanted to, but I was too ambitious for my own good. I wanted so very desperately to be an Eagle Scout. So I stayed in the closet.

I am not someone who quits or gives up easily. My middle name is Lawrence, a name choosen because of the fact that my family is descended from the brother of Captain James Lawrence, who created the famous saying "Never give up the ship". It's a statement I have found a great deal of inspiration from. Once I had set my sites on becoming and Eagle Scout, I was not going to be deterred.

Naturally, this set me up for a deep and complicated internal conflict. I wanted to be an Eagle Scout and I could not do anything to jeopardize that. This meant I could not breath a word of what I was to anyone. No matter how hard things got, coming out simply was not an option.

But internalizing this conflict only caused to fester and to take on it's own life. While working on my Eagle Scout project, I attempted to commit suicide. In the months that followed I had what could be labeled a nervous break down. I was diagnosed with depression. One of the medications I took had side effects which included "fatigue" and "increased saliva production".

Basically this meant I spent much of my class time my senior year falling asleep and waking up when the bell rang with my face in a humongous puddle of drool. Teachers would sometimes wake me up sooner if I started snoring.

Things got so bad that I actually considered dropping out of high-school.

It did not have to be like that. I entered my senior year as a member of honor society, a 1340 SAT score, and while I was not a top member of my class, my GPA was respectable. I was taking one course which had the possibility of college credit (Science in Modern Society) and otherwise sailing high. I had spent the summer before visiting campuses and pouring over college catalogs trying to decide where I wanted to go after I graduated. I was accepted at Clarkson University but decided against attending due to my health issues. Instead, I decided to go to SUNY Oneonta and in the Fall of 2002, I started taking classes as a non-matriculated student.

Which brings me back to what started me on this topic, what the hell do I do with all the stuff that I accumulated over the years that I was a scout? Do I burn it? Throw it away? What exactly does one do with something that carries with it the memories of so many painful experiences?

But throwing away all of my BSA memorabilia would mean throwing away stuff that carries with it memories from a great deal of my formative years. Destroying this material would come very close to destroying a part of my life.

Yes, there was pain in the end, but there were a lot of good memories as well. I cannot forget the suffering I went through my senior year, any more than I can forget the more pleasant times spent playing card games around a camp fire.