I really dig this XKCD cartoon.

There is this certain tendency I think, when social justice issues are brought up for certain people to react with "But but it's so hard to [blank]" where the blank is filled in with items like the following:
keep a transgender/transexual persons' pronouns straight
avoid using ableist language like "stupid" "lame" "dumb"
stop saying "that's so gay" when one really means "that's so stupid"
saying Happy Holidays rather than Merry Christmas (unless one knows the person you're greeting happens to be Christian and/or does not mind being wished a Merry Christmas)
change a sports team name like "Redskins" to something not racist
and so on.

In any event, I don't think I've found a better response then to such an attitude then the following XKCD cartoon. Pay particular attention to the mouseover text. 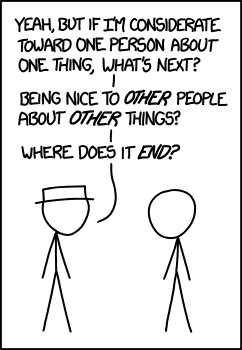 Posted by Unknown at 2:18 PM No comments:

Overview
Casablanca is an extraordinary film. Not only is it Hollywood's greatest tale of romantic love set against the stormy backdrop of the World War II but it has the most memorable happy ending ever shown on the silver screen.

Synopsis
Rick (Humphrey Bogart) is the owner of Rick's Café Américain, which caters to a wide clientele. When Nazi resistance leader Victor Laszlo (Paul Henreid) and his wife Ilsa Lund (Ingrid Bergman) show up at Rick's cafe, the two not only are in desperate need of transit papers, but Ilsa forces Rick to remember his brief experimentation with heterosexuality. Coincidentally, Rick has recently managed to obtain a set of valuable transit papers, thereby forcing Rick to choose between his current lover, Police Chief Louie Renault (Claude Rains) and aiding Ilsa and her husband escape the Nazis.

The Queering
Had Casablanca been released in a more recent times, perhaps in the form of a serialized novel aimed at the teenage crowd, it would not be difficult to see it's fandom quickly dividing itself into Team Ilsa and Team Renault. I say that as it's hard not to empathize with the difficult decision Rick is forced to make. On one hand he clearly loves Ilsa and deeply cherishes the brief period of time they shared in Paris in spite of the abrupt way she dumped him at the end. On the other, making her happy by giving Laszlo and her the transit papers would damage the political standing of Chief Renault once the escape of Victor and Ilsa was discovered by Nazis. What more difficult decision could there be than to have to choose between the two people you love the most?

Chief Renault, for his part, attempts to dissuade Ilsa when she shows up from attempting to rekindle the romance she once had with Rick by stating "Well, Rick is the kind of man that... well, if I were a woman, and I were not around, I should be in love with Rick." When that fails, Renault tries to make Rick jealous, by tricking Rick into thinking that he is planning on accepting sexual favors from a woman who is in need of transit papers for her and her husband. The ruse works and Rick makes sure that the husband is able to win at the roulette tables in order to prevent Renault from straying.

While the racist standards of the time prevented him from presenting as a sexual creature, Sam (Dooley Wilson) too also demonstrates affections for Rick. Like Renault, Sam displays extreme jealousy towards Ilsa when he tries to dissuade her from making contact from Rick. He apparently did not want to have to comfort Rick again, as he obviously once did after Ilsas' brutal breakup with Rick in Paris. Note the way Sam gently caresses Ricks' shoulder on the train during their escape from Paris. Rick, for his part, returns Sams' affections by attempting to negotiate a higher salary for Sam from Signor Ferrari (Sydney Greenstreet), when Rick goes to Ferrari to sell the Café Américain. Apparently when Rick said, "I stick my neck out for nobody" he was only referring to individuals he didn't deeply care for.

Of course there is the ending, where Rick selflessly decides to risk his relationship with Renault and give Ilsa the exit papers so she and Laszlo can escape to continue fighting against the Germans. It is a no win situation for him. While it means that Laszlo will be able to continue to his resistance work against the Axis powers, the unenviable consequences mean that Rick not only ending his relationship with Renault, but sacrificing the possibility of companionship with Ilsa at the same time. It's a noble risk but one that Rick is ultimately rewarded for when Renault, clearly happy that Ilsa is out of the picture, forgives Rick for his decision. Note that he does this in spite of the fact that Rick had just taken him hostage in order to allow Ilsa and Laszlo to escape. The two then walk off into the mists, happy to begin a new and more beautiful relationship. Has Hollywood ever created a romance as deeply affecting as this? I am sure many have wept gallons of tears at this moment, so overwhelmed with joy they must have been.

Ultimately, Casablanca is pure Hollywood cornball. But it's beautiful cornball. While the romantic elements are the films strongest, this is ultimately a World War II propaganda film. As such, I cannot help but wonder if the reason for the films' initial success had to do with a brief line few people remember today. After Rick gives him the transit papers, Laszlo says, "Thanks. I appreciate it. Welcome back to the fight. This time I *know* our side will win." It's a small moment but one that I cannot help but think would have resonated with audiences during the dark days of the time. It's a moment of subtle hope, one whose message is soon underscored by the breathtaking ending.

Yes, this time our side won.

Recommendation
Casablanca would be worth walking in (and out) of all the gin joints in the world while searching for one that happens to be showing this movie.


Want to find a review of a particular work? Check out the Title Index, the archive of all reviews posted listed alphabetically.
Posted by Unknown at 7:22 AM No comments:

Overview
Loosely based on real life story of "Leopold and Loeb", two gay lovers who killed a 14 year old Bobby Franks, Rope tells the story of two upper class college students who strangle one of their fellow classmates. In short, another example of Alfred Hitchcock's fetisation of queer killers.

Synopsis
Two college students, the reluctant Philip (John Dall) and the daring Brandon (Farley Granger) strangle one of their former classmates David (Dick Hogan). Then they invite members of his family, mutual friends, as well as their former school headmaster Rupert (James Stewart), to a party in order to increase the thrill of the kill. However, Philips' obvious nervousness piques Ruperts' suspicions. When Brandons' repeating of Ruperts' interpretation of Nietzche, that superior individuals have a moral right to kill their inferiors, further draws attention to Davids' absence.

The Queering
The presentation of Rope was somewhat experimental. The entire story is set in "real" time, with Hitchcock attempting to use as few edits as possible and hide a couple of cuts by zooming in close to a couple of objects. However, this backfires, as the efforts to disguise said cuts are clumsy and draw attention to themselves and unfortunately an uncharismatic Jimmy Stewart addslittle to the attempts at verisimilitude.

There is a pattern that I have noticed, where real life individuals who were gay, lesbian, bi, transgender, or transexual, did something "evil", then movies are infinitely more likely to accurately depict characters based on those historical figures sexual orientation or gender identity. On the other hand if the real life person did something heroic or good, then the pattern is reversed. Gay or lesbian individuals become bi and bi characters become straight, while effeminate queens will inevitably get butched up.

The only thing that prevented Hitchcock from following this pattern was, ironically, the Hays Code. Since depictions homosexuality was banned outright, the director was forced to limit the characters sexuality to mere subtext. However, offscreen the filmmakers and particular Hitchcock made it clear that they wanted to make a film about queer sexuality. The final product was even banned by some theaters due to the fact that it had gone so far as to include coded gay characters, even if said characters were depicted as evil murderers. Honestly, I never thought I would see the day when I would find myself mildly thankful for Hollywoods' infamous production code.

On the philosophical side of things, the character of Brandon attempts to justify the murder by quoting Rupert, who in turn had been riffing on Nietzche. Unfortunately, the message ends up being garbled. Perhaps it's because Nietzch is a difficult writer to "get" that any superficial analysis is doomed to failure. Ruperts' eventual condemnation of the ideas he had (apparently) originally endorsed doesn't help matters very much. A more recent film to be based on the Leopold and Loeb case, Swoon managed to avoid this problem by focusing more on the psychological forces driving the characters rather than any philosophical justifications they tried to come up with.

Recommendation
No true ubermensch would allow themselves to be roped into seeing this movie, unless they had a strong interest in Hitchcock or the history of queer cinema.

The Rating
2 stars out of 4


Want to find a review of a particular work? Check out the Title Index, the archive of all reviews posted listed alphabetically.
Posted by Unknown at 7:34 PM No comments:

Added Against Me! "I was a Teenage Anarchist" to Queer Friendly Music

After a bit of thought, I've decided to add I was a Teenage Anarchist by Against Me! to Queer Friendly Music. I was hesitant to do so for a couple of reasons, namely that the queer content is entirely subtext.

However, given that I was unable to find any music videos from YouTube that I could embed here from the recently released Transgender Dysphoria Blues, I decided to include I was a Teenage Anarchist as the subtext is rather strong and the entire concept of the video revolves around Laura Jane Grace being rejected by the anarchist community due to transphobia on the part of bigoted anarchists.

Or at least, that is how I read the third verse, which goes:

Obviously though, you have to know that Laura Jane Grace is a transgender woman - who transitioned after the song was released - in order to "get it" but I think meaning is pretty clear in retrospective.

In any case, I downloaded and listened to the entirety of Transgender Dysphoria Blues and I will say that I thought it was a pretty good listen.

Against Me - I was a Teenage Anarchist

Posted by Unknown at 8:00 AM No comments:

Email ThisBlogThis!Share to TwitterShare to FacebookShare to Pinterest
Labels: Against Me, I was a Teenage Anarchist, Queer Friendly Music, queer subtext
Newer Posts Older Posts Home
Subscribe to: Posts (Atom)